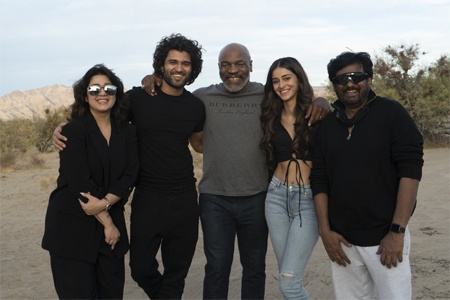 Ever since they landed in the US, Liger’s core team Puri Jagannadh, Vijay Deverakonda, Ananya Panday and Charmme have been having a gala time in Las Vegas. Icing on the cake was when the team recently met the US boxing legend Mike Tyson, who will be making his debut in Indian Cinema with a crucial role in Liger. Tyson commenced shooting for the movie yesterday.

Not stopping there, Tyson specially asked for Aloo Gobi, Palak Paneer, Samosas and Kebabs and the team was more than happy to treat him to a sumptuous meal. Needless to say, Tyson too was delighted with Liger team’s love and hospitality.

Liger is being produced jointly by Puri Jagannadh, Charmme and hotshot Bollywood filmmaker Karan Johar and Apoorva Mehta. The film will have a pan-India release and the makers are planning to release the movie in first half of 2022.