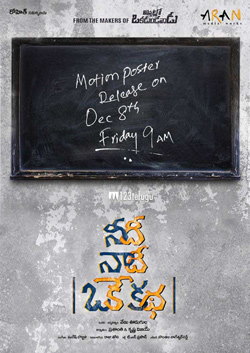 After receiving immense applause for his performance in the role of a confused youngster in Mental Madhilo, hero Sree Vishnu is gearing up for the release of his next film, a romantic comedy titled Needi Naadi Oke Katha. NNOK is being presented by Sree Vishnu’s friend and actor Nara Rohit under Aran Media Works banner.

The motion poster of Needi Naadi Oke Katha will be unveiled on December 8 at 9 am. NNOK has Bichagadu actress Satna Titus as the female lead. Debutant Venu Udugula is the film’s director, while Appatlo Okadundevadu producers Prashanthi and Krishna Vijay have bankrolled the movie.

NNOK’s makers have reportedly followed the Dogme 95 manifesto while shooting the film. More details will be revealed soon.