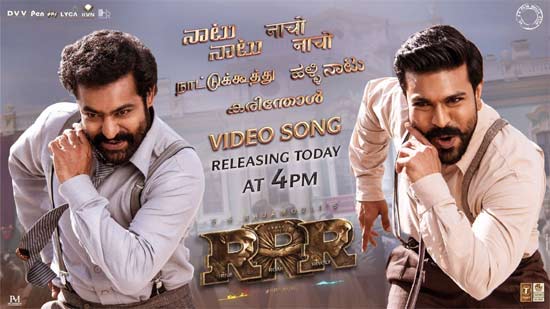 Star actors Jr NTR and Ram Charan starrer RRR is doing well at the ticket windows at the moment. Directed by the ace filmmaker, SS Rajamouli, the movie has shattered many existing records and created new ones.

Now, the makers have come up with a new update. The full video song of Naatu Naatu, the most famous mass track from the film RRR, will be released today at 04:00 PM on YouTube. Naatu Naatu became a hit track because of the beats and especially the marvellous dance movements of both Charan and Tarak. Thanks to the popular choreographer Prem Rakshith.

The makers will also release the other video songs from the movie, eventually. Produced by DVV Danayya on a grand scale, the film’s music is composed by MM Keeravaani.