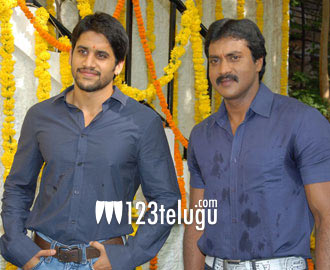 Naga Chaitanya and Sunil have been bonding quite a lot these days, thanks to their upcoming film, which is a remake of Vettai. The two are currently shooting for a wedding song at Nanakramguda in Hyderabad. The duo will be seen as brothers in this action entertainer and after Josh, they are once again acting together in this film. Kishore Kumar (Dolly) is directing the film and it also stars Tamannaah and Andrea Jeremiah in lead roles. Bellamkonda Suresh is producing the film. This untitled film is expected to hit the screens later this summer.