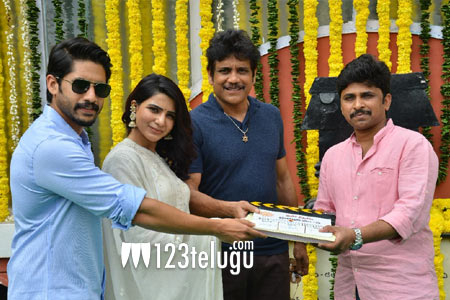 Naga Chaitanya and Samantha’s fourth film had its formal launch ceremony this morning. Hero Nagarjuna did the inaugural formalities. This will be Chay-Samantha’s first film after marriage.

Chay-Samantha’s latest film is a romantic drama which deals with the love story of a married couple. Ninnu Kori fame Shiva Nirvana will be directing the movie. This as-yet-untitled film also has Hindi TV actress Divyansha Kaushik essaying a crucial role.

Sahu Garapati and Harish Peddi will be jointly producing the movie under Shine Screens banner. Gopi Sundar will compose the music.