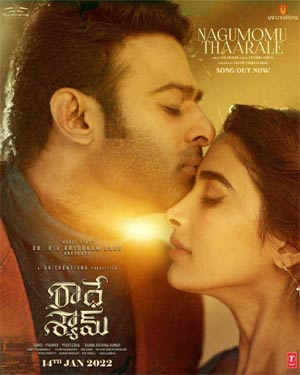 The much-awaited second single from India’s highest-paid star, Prabhas’ Radhe Shyam’ is finally out now. Titled Nagumomu Thaarale, the cool and breezy song depicts the chemistry between the lead pair Prabhas and Pooja Hegde in a superb manner.

The Hindi version of this song which was released yesterday has gained a huge response from listeners. The makers have released the song today in Telugu, Tamil, Kannada, and Malayalam.

Directed by Radha Krishna Kumar, the pan-India film, Radhe Shyam is set to hit screens worldwide on 14th January 2022. The movie is also scheduled to release in Japanese and Chinese languages.