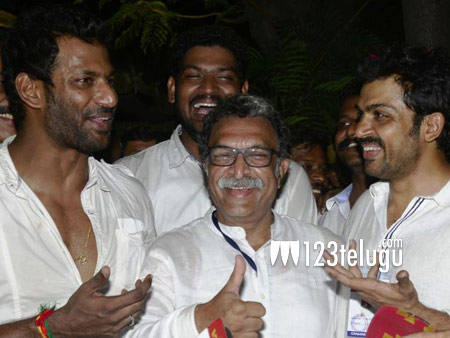 After the months long battle for supremacy, the Nadigar Sangam elections came to a nail biting finish last night. The polling took place in Chennai yesterday and the results were announced around midnight. The Vishal, Nasser and Karthi led Pandavar Ani swept the polls by clinching all the five chief posts in the association.

The counting was as intense and dramatic as the general elections, with both Pandavar Ani and Sarathkumar groups fighting neck to neck till the end. Vishal has been elected General Secretary of the Sangam while veteran actor Nasser won the President post and Karthi claimed the Treasurer post.

Senior actor Sarathkumar conceded his defeat and congratulated the Pandavar Ani team. Meanwhile, the Pandavar Ani members expressed their determination to solve the association’s issues at the earliest.