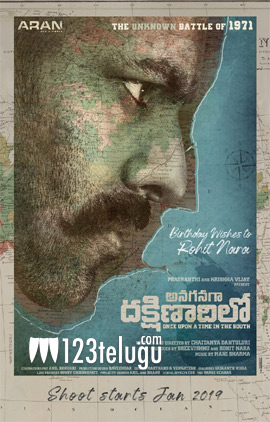 Nara Rohit is keenly awaiting the release of Veera Bhoga Vasantha Rayulu. And very soon, he will be joining hands with his debut film Baanam’s director Chaitanya Dantuluri for an intense period drama, Anaganaga Dakshinadilo. The film’s first look poster and title were unveiled on the eve of Nara Rohit’s birthday in July.

As per the latest updates, Anaganaga Dakshinadilo (Once upon a time in the South) is nearing the completion of its pre-production and Art Director Ravinder is erecting giant sets that reflect a period backdrop. The regular shoot will commence soon. The film is set in the year 1971. Nara Rohit and hero Sree Vishnu are jointly producing the movie. Manisharma is the film’s music composer.