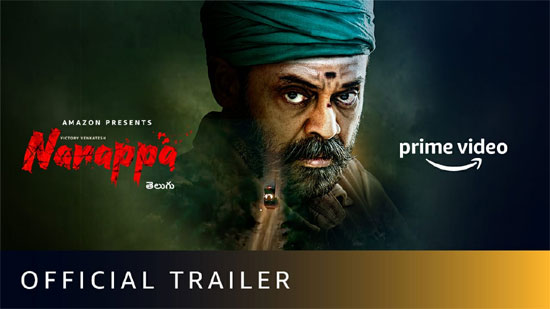 Narappa is a film that many are waiting for as it has Venkatesh in a lead role. The film is a remake of Dhanush’s Asuran and the makers revealed the trailer today.

After a very long gap, Venkatesh is seen in a mature role and he kills it in an intense avatar. Venkatesh’s makeup, body language suits his role perfectly.

Priyamani is seen as his wife and she too has a bold role. Rajiv Kanakala is seen in a key role and the BGM highlights the tense atmosphere superbly.

Srikanth Addala has directed this film and he has showcased Venky in a superb manner. The star hero is seen in a double role and there is a lot of bloodshed in his character. which is elevated well.

The trailer has surely lived up to the expectations and will be out on the 20th of this month on Amazon Prime.