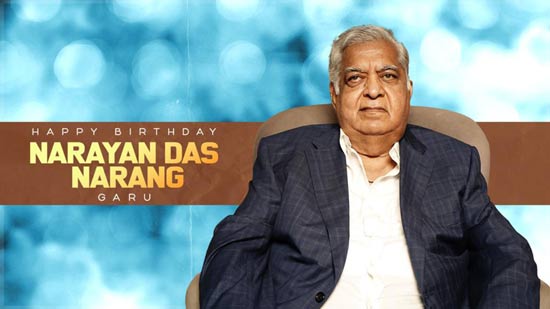 For decades, veteran film producer, distributor, exhibitor and financier Narayan Das Narang has been an inspiration to many in Tollywood. Even though he hails from the NTR and ANR era, Narayan Das is still the most active in multiple departments of the industry.

Narayan Das Narang is one of the oldest and leading financiers in Tollywood and he is also a pioneer distributor in Nizam. The world-class AMB Cinemas which he co-owns along with hero Mahesh Babu is hailed as one of the best multiplexes in India.

On the other hand, Narang’s production house – SVCC, is in top gear in film production. A multi-lingual pan-India film in Dhanush and Sekhar Kammula’s combination and another film starring Sudheer Babu were announced recently.

SVCC also has plans to make films with young heroes Sharwanand, Adivi Sesh and Nikhil, apart from a Telugu-Tamil bilingual film with Kollywood hero Siva Karthikeyan. In Tollywood, while Nagarjuna and Praveen Sattaru’s film is in initial stages of production, Naga Shaurya’s Lakshya is nearing completion. Also, Naga Chaitanya’s Love Story is done with all the formalities and is ready to hit screens..

With so much work happening under him, it is not an exaggeration to say that Narayan Das Narang is the most happening man in Tollywood right now. The legendary filmmaker is celebrating his birthday today and his well-wishers are extending their wishes to him.