Naveen and I dreamt of this day: Vijay Deverakonda at Jathi Ratnalu event
Published on Mar 7, 2021 11:25 pm IST 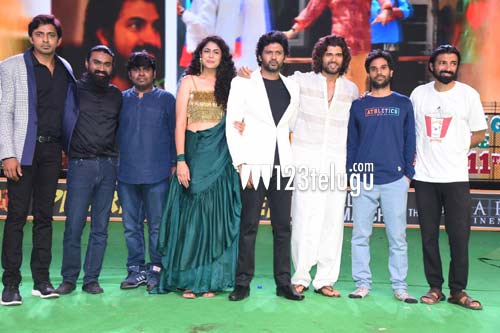 Hero Vijay Deverakonda was the chief guest at the pre-release event of his long-time friend Naveen Polishetty’s upcoming comic caper, Jathi Ratnalu, that was held in Warangal tonight. Speaking at the event, Vijay went nostalgic and recollected his association with Naveen from 2014.

“Naveen and I used to do theatre at a drama group and Priyadarshi used to act in another theatre group. Rahul Ramakrishna did backstage in our group. Naveen and I had dreamt of this day where thousands of fans will throng our movie functions. We used to laugh at our dreams, but I’m so glad that our dreams have come true finally. We promise you that we will give you a memorable experience,” Vijay said.

Jathi Ratnalu has young actress Faria Abdullah making her Tollywood debut. KV Anudeep is the director and Nag Ashwin is the producer of this entertainer. The film is releasing on March 11.