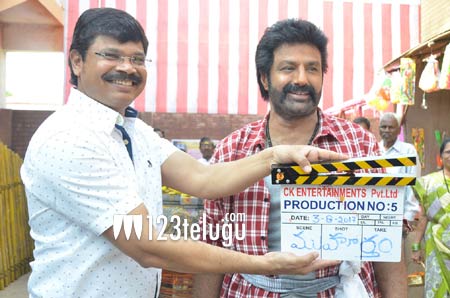 After wrapping up Paisa Vasool, Balakrishna immediately kick started his new film in the direction of K S Ravi Kumar earlier today. The film was launched in RFC and star director Krish switched on the camera and Boyapati Sreenu gave the first clap.

The first shot was executed in true Balakrishna style where the actor was seen smashing a goon in a market setup. The film’s regular shooting will continue from today and heroine Nayanthara will join later.

The film has music by Chirantan Bhatt and C Ram Prasad handles the camera. C Kalyan produces this film which is touted to be a complete action entertainer.