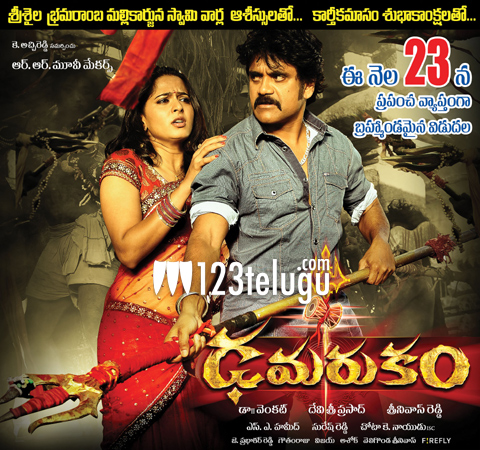 A new release date has been officially set for ‘King’ Akkineni Nagarjuna’s socio-fantasy entertainer ‘Dhamarukam’. The production team has released new posters with November 23rd as the date. The date holds special significance as it happens to be Naga Chaitanya’s birthday.

‘Dhamarukam’s release was delayed multiple times due to financial issues and became a topic of controversy in the industry. With a good buzz around the project and the absence of any major Telugu film at the Box Office, ‘Dhamarukam’ has a good chance if it comes out on the 23rd.

Anushka will be seen as the heroine opposite Nagarjuna in this movie and Devi Sri has scored the music. Venkat has produced the movie on R.R.Movie Makers banner. Srinivas Reddy is the director of this big budget production