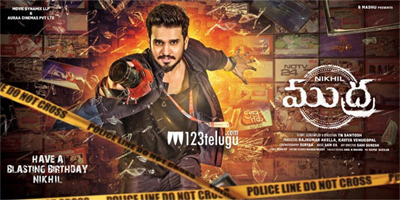 Nikhil and Lavanya Tripathi-starrer ongoing thriller, Mudra, is halfway through already. The film’s team is canning a few romantic scenes on the lead pair in the latest schedule. The film’s intriguing first look poster was unveiled on Nikhil’s birthday.

Mudra is an official remake of the hit Tamil thriller, Kanithan. In the film, Nikhil essays the role of an investigative journalist named Arjun Lenin Suravaram. TN Santosh, the director of the original, is helming the Telugu version as well.
Rajkumar Akella and Kaviya Venugopal are jointly producing the movie, while Madhu is presenting it. Tamil composer Sam CS is scoring the music.