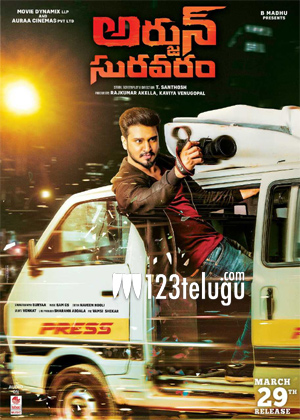 The makers of young stars Nikhil and Lavanya Tripathi’s ongoing action thriller have just unveiled the film’s new title along with a cool, new poster. The film has now been titled Arjun Suravaram, after Nikhil’s character in the film. Furthermore, Arjun Suravaram is slated to hit screens on March 29.

Arjun Suravaram is an official remake of the super hit Tamil thriller, Kanithan. In the film, Nikhil essays the role of an investigative journalist. The film is being directed by TN Santhosh, who also helmed the Tamil original. Auraa Cinemas and Movie Dynamix banners are jointly producing the film. Tagore Madhu is presenting it. Stay tuned for further details.