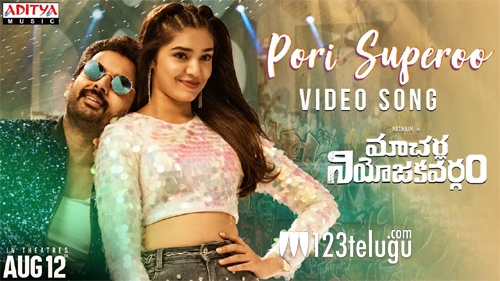 Tollywood young hero Nithiin is gearing up for his next Macherla Niyojakavargam which releases on 12th August. Catherine Tresa and Krithi Shetty are the female leads. The promotions have been spot on and the team is conducting a grand pre-release event tomorrow.

Today the makers have released the Pori Superoo video song from the film. Both Nithiin and Krithi Shetty have made stunning dance moves in the song. The energy shown by both the lead pair is incredible.

This ultra mass number is sung by Geetha Madhuri and Rahul Sipligunj and composed by Mahati Swara Sagar. The lyrical song will be out on August 10th. The film is bankrolled by Sudhakar Reddy and Nikitha Reddy.