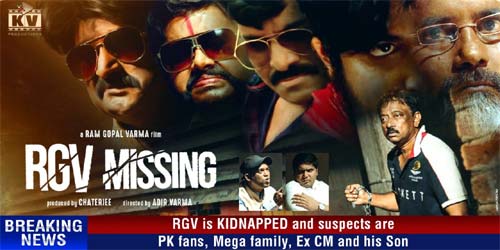 RGV is making a film called RGV missing and the tag lines of the film and suspects are PK fans, mega family, Ex-CM, and his son. The posters are out and by the looks of it, RGV himself is acting in the film.

After releasing the poster, RGV thought that there would be a great response but that has not happened at all. The reactions in social media are not that good and no one is responding in the first place.

RGV and his films are not entertaining at all these days and with RGV himself acting in these films, the audience has lost the small hope that they use to have on RGV.