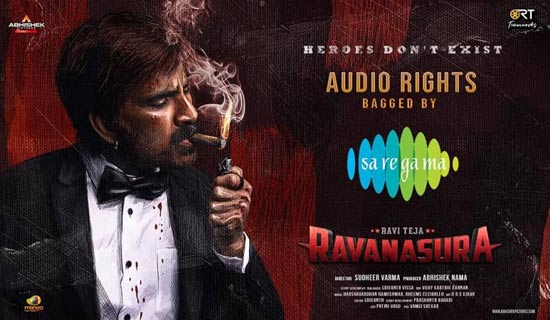 Mass Maharaja Ravi Teja is currently busy with multiple projects and Ravanasura is one of them. Directed by the young filmmaker Sudheer Varma, the movie’s new schedule is currently underway.

The latest news is that South India’s famous music label Saregama has bagged the audio rights. It is heard that Saregama has spent a bomb to grab the rights.

Anu Emmanuel, Megha Akash, Faria Abdullah, Daksha Nagarkar and Poojitha Ponnada are the female leads in this action thriller. Ravi Teja will be seen as a lawyer. Sushanth is also playing a key role in this movie.

Produced by Abhishek Aggarwal and RT Teamworks, the movie has music composed by Harshavardhan Rameswar and Bheems Ceciroleo.