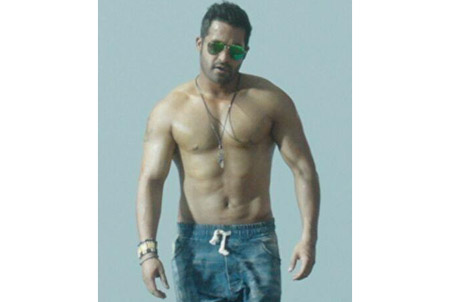 All those who have seen the leaked pictures of NTR’s look in Temper, have gone into a huge shock. NTR’s bare body look from his latest flick Temper has been making waves in the social networking sites. NTR’s chiseled body and a funky hair style have become the talk of the town, and have raised huge expectations for this Puri Jagan flick.

From a young actor who was over weight to this stunning transformation, NTR has really come a long way. From quite some time, reports were making the rounds that NTR will be seen in a new look, and these stills only support the fact. Kajal Agarwal is the female lead and NTR plays an powerful police officers role in this film which is produced by Bandla Ganesh.