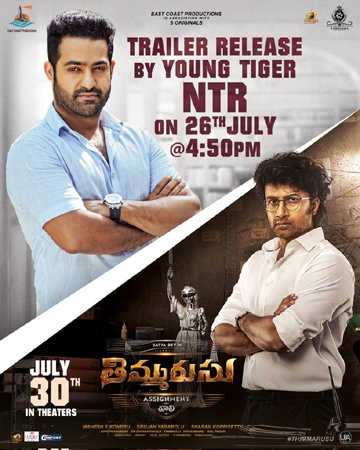 Thimmarusu, the intense crime drama featuring Satyadev and Priyanka Jawalkar, is all set to get a big boost ahead of its release. Star hero NTR will be launching Thimmausu’s theatrical trailer at 4:50 PM tomorrow (July 26). The film is slated to open in cinemas on the 30th of this month.

Thimmarusu is an official remake of the acclaimed Kannada crime drama, Birbal. The Telugu version is directed by Sharan Koppisetty and produced by Mahesh Koneru. Sricharan Pakala is the music composer. Thimmarusu is one among the two movies that will be hitting screens this 30th, as theaters are set to reopen and resume film exhibition.