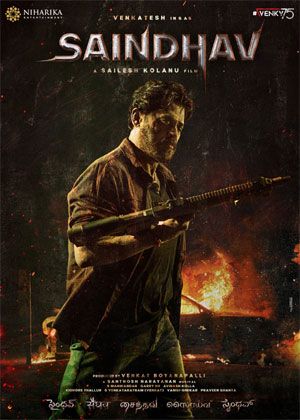 Hero Venkatesh’s landmark 75th movie was officially announced a few days ago. The makers today released a special video to reveal the film’s title and other details. The film is interestingly titled Saindhav and it will be simultaneously made in all the four major South Indian languages and Hindi.

The super cool glimpse video reveals that Saindhav’s story is set in a fictional port area named Chandraprastha. Venky appears in a rugged avatar with a beard and he also holds a gun in his hand. The tone, the drug vial, the explosion and Venky’s powerful dialogue in the end of the video together indicate that Saindhav is going to be high on action, with Venky playing an intense role.

Saindhav’s regular shoot will commence soon. HIT director Sailesh Kolanu will be directing the movie and acclaimed Kollywood composer Santosh Narayanan will be scoring the music for the movie. Venkat Boyanapalli will be bankrolling this project under Niharika Entertainment banner.