Only Telugus are going to theaters in the entire world: Trivikram at IVNR’s event
Published on Aug 25, 2021 3:00 am IST 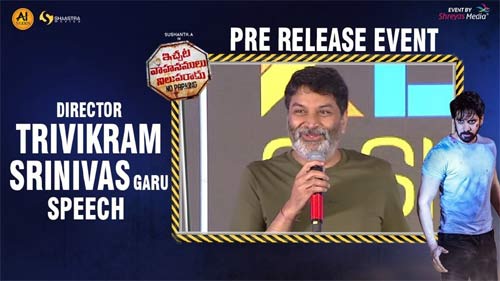 “Telugus are the only race in the entire world who are going to theaters and watching movies in these times. This inspires us filmmakers to make good content for them. I’m sure Ichata Vahanamulu Niluparadu is one such good film. I wish the film’s producers earn a lot of money and pay a lot of tax to the government,” Trivikram quipped.

Talking about Sushanth, Trivikram said Sushanth had reinvented himself as an actor with Chi La So and that he had cast Sushanth in ALVP after watching him in the movie. The star director wished the film’s heroine Meenakshi Chaudhary a successful career in Tollywood, and said he will be waiting for her dates to cast her in his movies. Finally Trivikram concluded wishing the film’s director and producers.