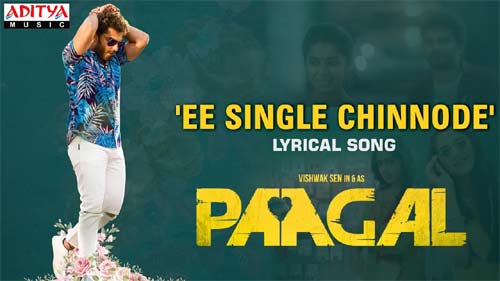 Young hero, Vishwak Sen has a good following among youth. In fact, he is choosing films which will appeal largely to youngsters. Paagal is his next release and buzz around the film is quite high.

Today, the makers have unveiled the Ee Single Chinnode song from the film. As the lyrics suggest, Ee Single Chinnode New Love Lo Fresh Ga Paddade, the protagonist falls in love with different girls and every time, he feels the freshness of being in love.

The song composed by Radhan sounds peppy, while Benny Dayal’s vocals are energetic and lyrics by Krishna Kanth are catchy. Billed to be a magical love story, Paagal is directed by Naressh Kuppili. Dil Raju presents the film produced by Sri Venkateswara Creations in association with Bekkam Venugopal Lucky Media.