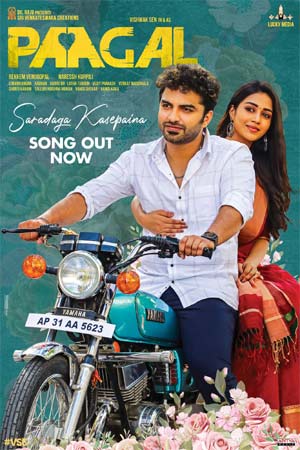 The makers of young actors Vishwak Sen and Nivetha Pethuraj’s upcoming romantic entertainer, Paagal, released a romantic number from the film’s audio album. Titled Saradaga Kasepaina, the song is a soothing and breezy love number with a touch of classical music.

Composed by young music director Radhan, who is on a high with Jathi Ratnalu’s success, Saradaga Kasepaina has been penned by popular lyricist Anantha Sriram and sung by Karthik and Purnima. The film has been directed by debutant Naresh Kuppili and produced by B Venu Gopal. The film is gearing up for its release on May 1st.