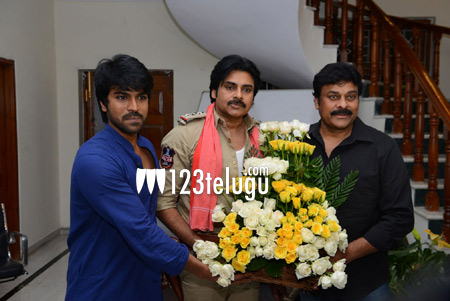 Powerstar Pawan Kalyan visited his brother Chiranjeevi’s residence to congratulate Chiru on his brief role in Ram Charan’s Bruce Lee. Pawan went straight from the sets of Sardaar Gabbar Singh to wish his brother and spent nearly half an hour with Chiru’s family.

In a media interaction that followed, Pawan said that he heard from his friends that Chiru’s onscreen appearance ​in his comeback film ​gave goosebumps to fans and that even he is excited to watch the film. Pawan also said that it was Chiru who paved the path for his successful career and that he always held his brother in high regard.