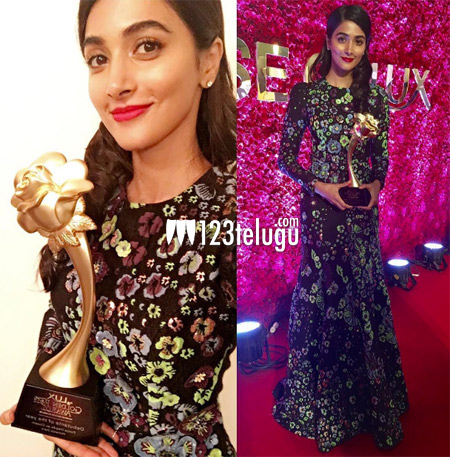 Pooja Hegde, the beautiful participant of Pantaloons Femina Miss India 2009 was the head tuner among the bevy of beauties that took part and stood as second runner-up at Miss India Universe 2010.

The leggy lass forayed into filmdom with Jiiva’s ‘Mugamoodi’ (Tamil) which was later dubbed into Telugu as ‘Mask’. This was followed by few successive films like ‘Oka Laila Kosam’ and ‘Mukunda.’

After a successful stint in the South, Pooja Hegde shot to fame in Bollywood with the historic movie ‘Mohanjo Daro’ opposite Bollywood Superstar Hrithik Roshan.

Directed by Ashutosh Gowariker, the movie garnered huge applause and the leggy lass was honored with Lux Golden Rose for the ‘Best Actress’ award. She took her twitter handle to express her joy over being conferred with the award.

Pooja Hegde tweeted “Thank you @LuxGoldenRose for the Best Debut award..It being my first,will always be special ❤️ #luxgoldenroseawards #grateful.”