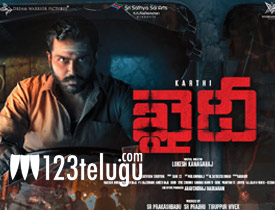 Yesterday, two biggies Whistle and Khaidi released in Telugu. While the film Whistle was most talked about, Khaidi started on a slow note.

But as the talk for the film has improved by leaps and bounds, the collections have started to increase. The occupancy for today’s morning shows was also impressive.

The film is a gritty action entertainer featuring Karthi in a lead role. Lokesh Kanagaraj directs the film.