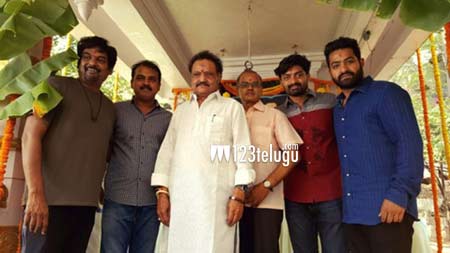 Nandamuri Kalyanram’s latest film under maverick director Puri Jagannadh’s direction has been kick-started in style in Hyderabad just a while ago. late NT Ramarao’s sons Hari Krishna and Rama Krishna and Young Tiger NTR along with his Janatha Garage director Koratala Siva graced the muhurtham ceremony to bless the team.

Touted to be a powerful mass entertainer, this as yet-untitled film will showcase Kalyanram in an explosive role. Puri Jagannadh is believed to have penned an intense story that talks about social consciousness. The film will be produced by Kalyanram under his NTR Arts banner.

More details about the film are awaited. The regular shooting will commence soon.