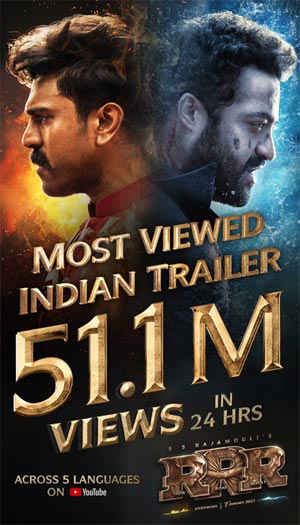 The trailer of SS Rajamouli’s RRR, which was released on YouTube yesterday, has gained a phenomenal response from everyone. It has now created wonders on YouTube.

The RRR trailer has created a new record by becoming the first-ever Indian trailer to cross 50 million views (including all languages) in less than 24 hours.

Also, the Kannada, Tamil, and Malayalam trailers got 5.2million, 3.25 million, and 2.42 million views in 24 hours, respectively. With this, the RRR trailer got a total of 51.12 million views(including all versions).

Also, the trailer became the most liked and the second most viewed Telugu trailer in 24 hours. It gained 1.2 million likes for the Telugu version alone and a total of 2.58 million likes including all 5 languages.