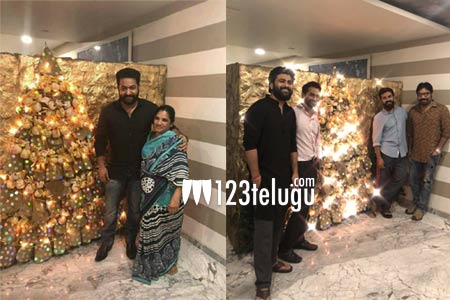 It’s no secret that Ram Charan and NTR Jr have become thick friends, and the duo meet every now and then, whenever they find time. In fact, Ram Charan was one of the chief guests at the launch of NTR’s Baadshah few years ago, and they were spotted together on more than one occasion after that.

Earlier this week, when Ram Charan hosted a pre-Christmas party at his house, he invited few of his friends from the industry, and not surprisingly, NTR Jr was also present at the party. The two are said to have bonded big time, along with others like Sharwanand, Sandeep Vanga and rest of Charan’s family.

A picture clicked at the event has now gone viral on social media and people are praising the two actors for sharing such a wonderful rapport. Interestingly, the duo is going to collaborate for the first time for SS Rajamouli’s upcoming film which will go on floors in the second half of 2018.