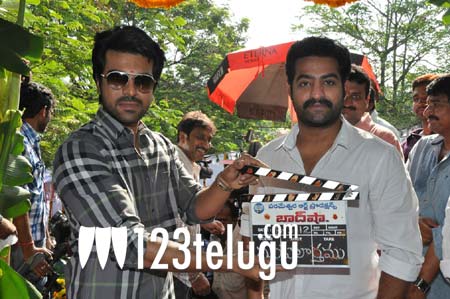 NTR’s upcoming film Baadshah was launched a earlier today (March 18) in Ramanaidu Studios. Much to the surprise of those present at the event, Ram Charan Tej was the chief guest of the ceremony. He clapped the muhurat shot which was canned on NTR. Both of them seemed to be in good spirits and even left the venue in Ram Charan’s Range Rover, which the actor was driving all by himself. It’s probably the first time in recent years that the two scions of their respective families have made a public appearance in this fashion. Venkatesh, S S Rajamouli, Vamshi Paidipally, S S Thaman, Kona Venkat, Gopi Mohan were also present for the opening ceremony. Srinu Vaitla is going to direct the film and Ganesh Babu is going to produce it. Kajal is playing the lead roles opposite NTR and the first schedule of the film might begin in April in Seoul.