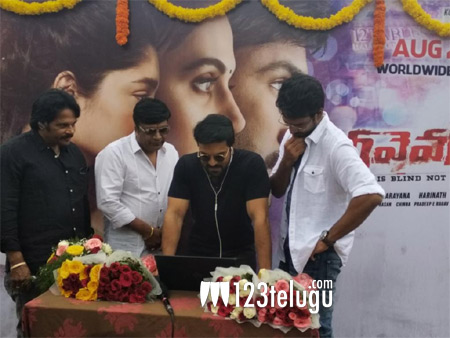 After the intense and intriguing trailer that released a couple of weeks ago, the latest theatrical trailer for Aadhi Pinisetty, Taapsee and Ritika Singh-starrer upcoming thriller, Neevevaro, was unveiled this morning. Ram Charan, who played Aadhi’s brother in Rangasthalam, unveiled Neevevaro’s latest trailer.

Unlike the teaser and the trailer, Neevevaro’s latest trailer is hilarious from the word go. Popular comedians Vennela Kishore and Sapthagiri promise unlimited entertainment with their rib-tickling comedy. Aadhi essays a visually impaired character in Neevevaro.

Neevevaro is directed by Hari Nath, while writer Kona Venkat penned the dialogues for the movie, apart from co-producing it under Kona Film Corporation banner in association with MVV Cinemas. The film is slated for release on August 24.