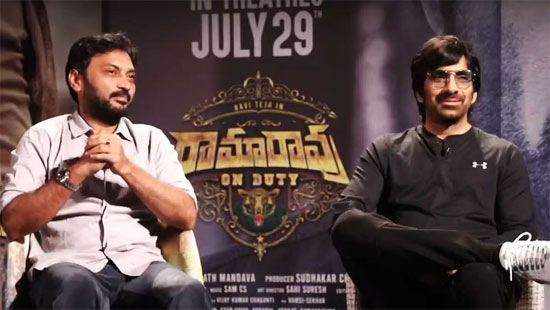 Mass Maharaja Ravi Teja and the director Sarath Mandava joined hands for Ramarao on Duty, scheduled to hit screens on July 29, 2022. Divyansha Kaushik and Rajisha Vijayan are the female leads in this movie.

The movie’s pre-release event happened last night and during it, the director Sarath Mandava made some comments about social media. He said that stop believing in Twitter reviews and asked to ignore the shitty tweets and watch the film in theaters. He also suggested audiences buy tickets directly at the ticket windows but not online. The comments have gone viral online.

Venu Thottempudi, Nassar, Tanikella Bharani, Pavitra Lokesh and others are also a part of this movie, produced by SLV Cinemas and RT Teamworks. Sam CS provided the soundtracks for this action thriller.