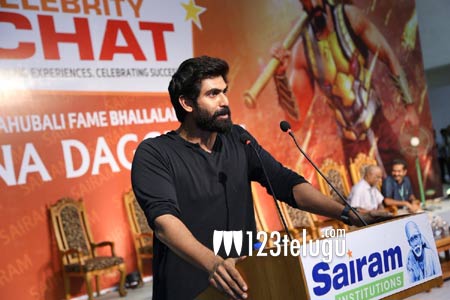 After scoring a huge hit with Nene Raju Nene Mantri, macho hunk Rana Daggubati is aiming to repeat the success with the film’s Tamil version, Naan Aanaiyittal. The Tamil version is releasing on September 22.

This morning, Rana and the film’s director Teja flew down to Chennai and interacted with the students of Sri Sai Ram Engineering College as part of promotions. During NRNM’s release, Rana promoted Naan Aanaiyittal in Chennai. However, the film was postponed due to Vivegam’s release.