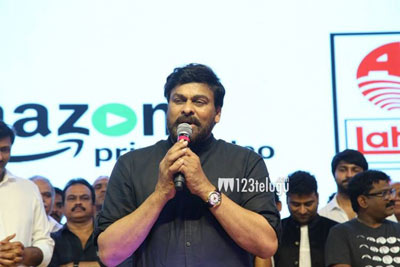 Megastar Chiranjeevi was the chief guest at the pre-release event of his son Mega Powerstar Ram Charan’s forthcoming period village drama, Rangasthalam. The event concluded in style in Vizag last night. Speaking at the event, Chiru was all praises for the Sukumar directorial.

“Rangasthalam will be for Ram Charan what Khaidi No.150 was for me,” Chiru said, expressing confidence over the film’s success. He went on to say that even though he’s proud of Charan as a father, he’s also jealous of his son being an actor, since Charan has got an opportunity to portray a character like Chitti Babu.

Chiru further said that director Sukumar’s village upbringing has helped him to showcase the rural life and all the emotions in a realistic manner. Also starring Samantha, Jagapathi Babu, Aadhi Pinisetty and others, Rangasthalam has music by Devi Sri Prasad. The film, produced by Mythti Movie Makers banner, is scheduled for release on March 30.