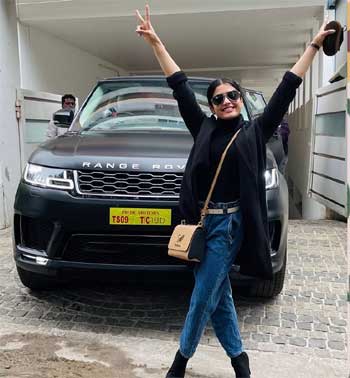 Rashmika Mandanna is on a roll with plenty of big projects in Telugu, Tamil, and Hindi to her kitty. Although she hasn’t officially revealed much details about her roles in her upcoming films, it’s quite evident that the actress has her plateful these days. After spending her New Year’s eve in Goa, the actress came back to Hyderabad to resume her work.

Ushering in the new year, Rashmika also thanked her fans for being an important part of her journey and in an emotional post, she stated that she couldn’t have imagined any of this in her life. Incidentally, the actress has gifted herself a swanky new Range Rover, and she didn’t shy away from sharing the picture with her fans on Instagram.

The actress will soon join the sets of Pushpa and in Bollywood, she has Mission Majnu and reportedly another film with Amitabh Bachchan to her credit.