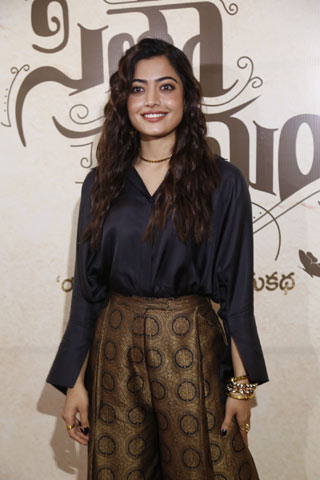 The theatrical trailer of Dulquer Salmaan’s upcoming Telugu movie Sita Ramam was launched in a grand manner at a special event happened in Hyderabad. The entire team attended the event and interacted with the media and audiences.

Rashmika Mandanna, who played Afreen in this movie, has said that she was afraid when Hanu sir asked her to act in the role of Afreen. She also mentioned that she was anxious to play Afreen, a character of different shades, but felt happy now after the trailer launch.

The energetic actress also added, “A beautiful love story like Sita Ramam needs a wonderful narrator and I become it. I hope that I did it well and you all will like my character and the film as well.

Directed by Hanu Raghavapudi, the romantic period drama has Mrunal Thakur as the love interest of Dulquer Salmaan. Sumanth, Prakash Raj, Gautham Vasudev Menon and others played prominent roles in this epic love drama, produced by Swapna Cinema. Sita Ramam will be out on August 5, 2022, in Telugu, Malayalam and Tamil.