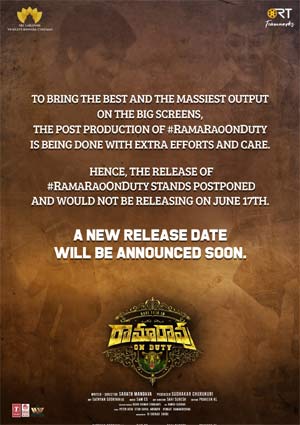 It is a known fact that Ravi Teja is doing a unique action thriller Ramarao On Duty which is being directed by debutant Sarath Mandava. The movie was scheduled for its theatrical release on June 17th.

However, due to delays in post-production works, the movie is pushed to a later date. The makers will announce a new release date soon.

The film is produced grandly by Sudhakar Cherukuri under SLV Cinemas LLP and RT Teamworks gets postponed. Divyansha Kaushik and Rajisha Vijayan played heroines in the movie which is based on real incidents. Venu Thottempudi in his comeback will be seen in a vital role in the movie.

Sam CS rendered soundtracks for the movie. Cinematography is by Sathyan Sooryan ISC, while Praveen KL is the editor.