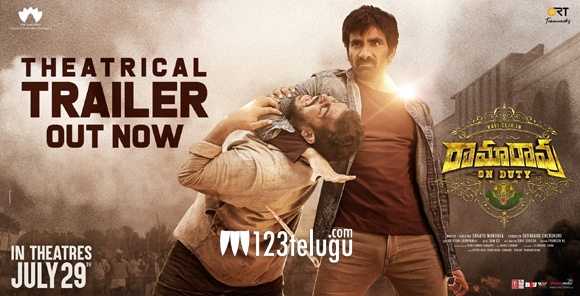 Mass Maharaja, Ravi Teja’s fans are in for a double treat today. Earlier in the day, the news came out that he is pairing with megastar Chiranjeevi.

Now, the trailer of his next flick Ramarao On Duty is released and it looks power packed. The movie is slated for release on July 29th.

The manner in which Ravi Teja is introduced, his screen presence, body language, and intensity are stunning. The film’s teaser showed the action side of the movie, wherein the trailer divulges its plotline.

When many people go missing from different villages, Ravi Teja who is the Tahasildar of the region takes up the case. Director Sarath Mandava makes his debut.

Sam CS’s BGM is fine. Divyansha Kaushik and Rajisha Vijayan played the heroines, while Venu Thottempudi will be seen in a vital role in the movie produced by Sudhakar Cherukuri under SLV Cinemas and RT Teamworks.