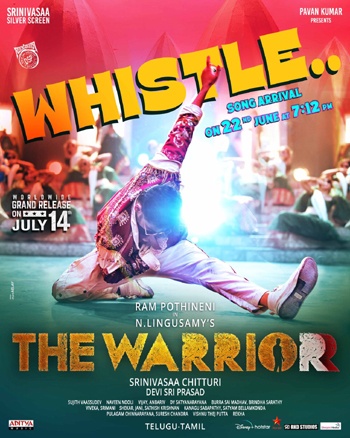 Energetic star Ram Pothineni is coming to entertain his fans and audiences with his upcoming movie, The Warriorr. Directed by Lingusami, the action thriller has Krithi Shetty and Akshara Gowda as the female leads.

The latest news is that the makers have decided to speed up the promotions as the movie is up for a release in theaters on July 14, 2022. As a part of that, they have decided to release the 3rd song titled Whistle, a mass song, from the movie at 07:12 PM on June 22, 2022. A poster has also been released to announce the same.

Aadhi Pinishetty played the villain in this bilingual movie. Nadiya will be seen in a pivotal role in this movie. Bankrolled by Srinivasaa Silver Screens, the Telugu-Tamil movie has music composed by Devi Sri Prasad.