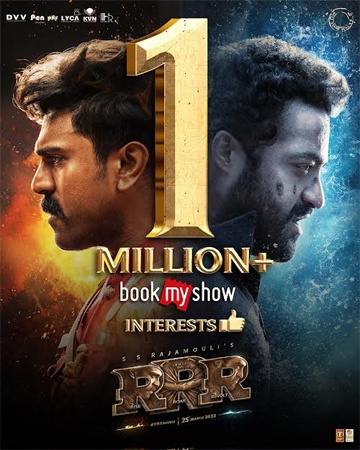 Tollywood star heroes Jr NTR and Ram Charan have joined hands for the first time for a movie called RRR, directed by none other than SS Rajamouli. Ahead of the release, the makers have planned massive promotional tours across the nation in the coming days.

Meanwhile, even before the sales of tickets, RRR has been creating sensational records. In Book My Show, an online ticket portal, the movie has got more than 1 million interests. This is a small example to show how much people are eagerly waiting for the action drama.

Produced by DVV Danayya, the movie has stars like Alia Bhatt, Ajay Devgn, Shriya Saran, Samuthirakani and others in key roles. RRR has MM Keeravaani’s music and Senthil’s cinematography. The movie is confirmed to release in theaters worldwide next Friday.