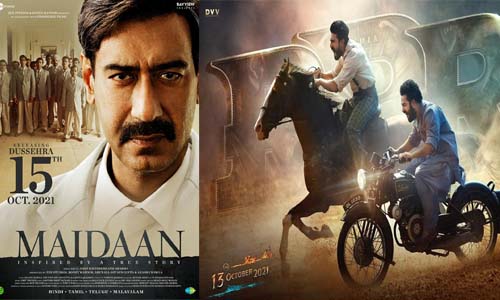 The makers of Rajamouli’s high budget pan-Indian magnum opus, RRR, yesterday announced that the film will be released on October 13 as a Dasara festive treat. It’s well known that Bollywood star Ajay Devgn will be playing the role of a mentor to NTR and Ram Charan in RRR.

And it looks like RRR’s clash with Ajay Devgn’s highly-anticipated pan-Indian sports biopic, Maidaan, is inevitable. Maidaan is scheduled to hit screens on October 15, just 2 days after RRR opens in cinemas. Whether or not any of these two big budget movies will back off from the Dasara clash remains to be seen.