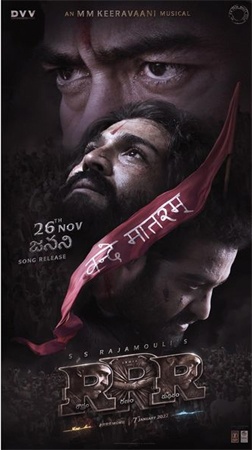 RRR is a film that many are waiting for eagerly. The two songs released so far have become a rage and the time has come for the third song.

The news now is that the soul anthem of RRR, Janani will be out on the 26th of this month in a big way.

This news was revealed on the occasion of Ajay Devgan’s birthday. RRR is directed by Rajamouli and is up for a release on the 7th of January all over the world.

DVV Danayya produces the film which has Alia Bhatt in a key role along with Samuthiraikani and others.