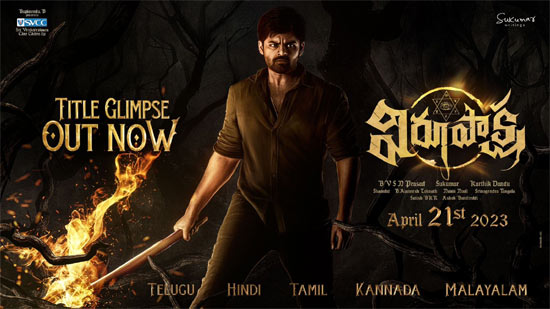 Mega hero Sai Dharam Tej has joined hands with the director Karthik Dandu for a mystical thriller. Samyuktha Menon is the female lead in this flick.

Today, the makers have revealed the title of the film and also released a glimpse of it. Jr NTR gave his majestic voiceover to the title glimpse. The movie has been titled Virupaksha. The glimpse looks intriguing. Also, the glimpse revealed nothing about the plot. The makers have also announced that the movie will be out on April 21, 2023, in Telugu, Tamil, Malayalam, Kannada and Hindi.

Sri Venkateswara Cine Chitra and Sukumar Writings jointly produced this movie, which has Anjaneesh Loknath as the music director.