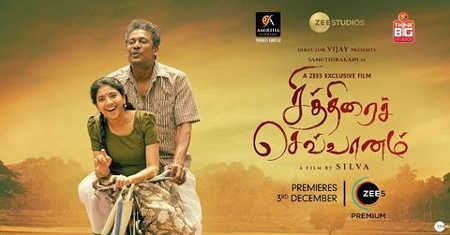 It is well known that actress Sai Pallavi’s younger sister Pooja Kannan is making her feature debut as an actress with the upcoming Tamil film, Chithirai Sevvaanam. The film also features acclaimed Kollywood actor-filmmaker Samuthirakani and it is directed by star stunt co-ordinator Stun Silva.

Chithirai Sevvaanam’s first look poster was unveiled by Dhanush, while Mollywood stalwart Mohanlal released the motion poster. The film showcases an emotional story of a father and his daughter. Malayalam actress Rima Kallingal will be seen in a crucial role. The film is produced by noted Tamil director Vijay and it is going to have a direct OTT release on ZEE5 Tamil on December 3.

Wishes to the team!