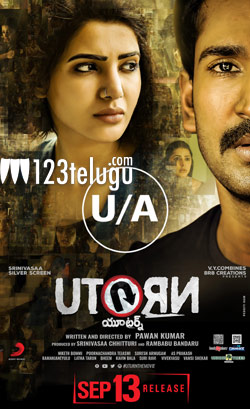 Samantha’s stylish dance moves in the promotional song of U-Turn has created a good buzz for the film. The latest we hear is that the film has completed its censor formalities with a U/A certificate.

With this, the film is set for a release on the 13th of this month in a grand way. Rahul Ravindran, Aadhi Pinisetty play other lead roles in the film which is the remake of a Kannada hit.

U-Turn will also release in Tamil simultaneously and is directed by Pawan Kumar.