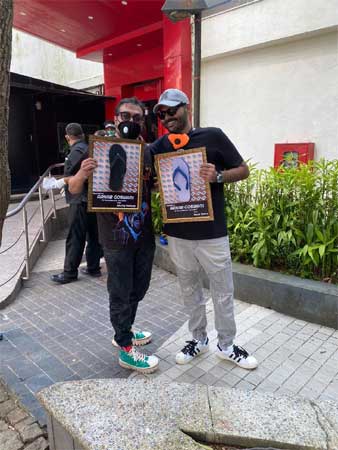 Anurag Kashyap is a noted director and does things in his own way. Not only his films are hard-hitting but his tweets are also on point. Anurag has been attacking the BJP government for a long time and now that Sushanth has passed away, he is counter-attacking the Republic channel who is targeting Bollywood in a big way with the support of Kangana.

Today, he took things a step ahead and directly went to the Republic office in Mumbai to protest. He along with stand up comedian Kunal Kamra, who also shares a heated past with the Rpublic channel took slippers laminated in photo frames and protested in silence.

Though the security did not allow them, Anurag and Kunal posted their protests on social media saying, “Birthday boy @anuragkashyap72 & I went to the @republic’s office to give Arnab excellence in journalism award.”