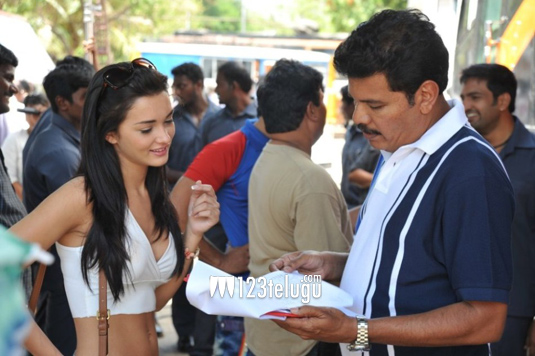 Amy Jackson is currently working in successful director Shankar’s film ‘Manoharudu’. The actress appeared in a couple of Tamil and Telugu films before and she will be seen as one of the heroines in Ram Charan’s ‘Yevadu’. However, ‘Manoharudu’ will be her biggest and most ambitious project.

In the film, Amy will be seen as a traditional Brahmin lady. Amy says that the experience has changed her as a person and she thanks director Shankar for it. “After playing the character in ‘Manoharudu’, I feel really bad about not being born in India. I love this life. My look and body language changed completely,thanks to Shankar. A stone can be turned into a beautiful sculpture and that’s exactly what has happened in my case. I am very lucky to have bagged this role”, she said.

The shooting of ‘Manoharudu’ is in the final stages of completion and Vikram will be seen as the hero of the film. AR Rahman has composed the music of this movie.