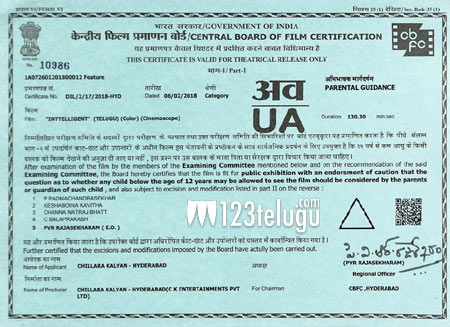 Sai Dharam Tej and Lavanya Tripathi’s soon to release action entertainer, Inttelligent, is set for a grand release on February 9. Sai fans are eager to see VV Vinayak’s presentation of their favorite hero who’s playing a young don in the movie.

We had reported earlier that Inttelligent’s censor formalities were completed with a UA certificate. The censor certificate reveals that the film has a short and crisp run-time of just 2 hours and 10 minutes, which can be quite advantageous upon the film’s release. C Kalyan has produced Inttelligent and Thaman has composed the music for the movie.