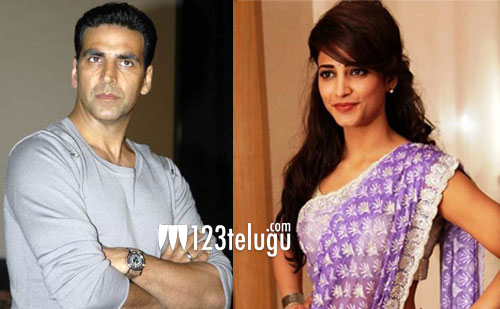 Shruti Haasan has bagged yet another big film in Hindi, as per the latest rumours in Bollywood. She had acted in films like Luck and Dil Toh Bachcha Hai Ji; however, she went on to become one of the most sought after heroines in South post the success of Gabbar Singh. Two of her latest Hindi films – D Day and Ramaiyya Vastavaiyya released today and both have got positive response from the audience.

Buzz in Bollywood is that Sanjay Leela Bhansali is keen on roping in Shruti Haasan for the Hindi remake of Tagore. Akshay Kumar is playing the lead role in the film. In the past, Tamannaah’s name was considered for the film; however, she’s already pairing up with Akshay Kumar is another film titled It’s Entertainment. If Shruti Haasan signs this film, it’ll be a huge project for her in Hindi and it’ll certainly give her a big boost in Bollywood as well. An official announcement is likely to be made soon. Director of Vedam and Gamyam, Krish is going to direct this Hindi remake of Tagore and it’ll mark his debut in Bollywood.